On April 4th, 2011, Google announced they are retiring the Position Preference Bidding option in May 2011. If you want to emulate the Position Preference option, you can set up two rules (per campaign, adgroup, or KW, depending on your needs) to control the bidding. The downside is that the bidding adjustments are done at most 1 time per day (but see below) and managing the rules in AdWords is a little clunky.

Note: Using CPA bidding eliminates the need to make these finer-grained adjustments all together.

Example: I have a campaign using Position Preference, and I am typically using a 3-6 position preference (avoiding the Top 2). To set up an Automated Rule to approximate this, I would add the following rules.

The first rule raises bids if my avg pos is too low:

At the Ad Group Level, add a “Change Max CPC Bids When…” rule to boost a “poor” Avg Pos: 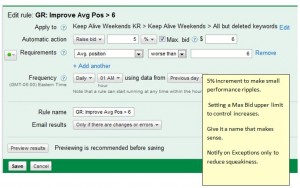 A similar rule should then be set up to Adjust downwards if the Avg Pos gets too “good”. 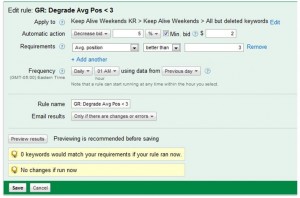 Since all of the Automated Rules for an account are lumped into one report, with limited sorting/filtering abilities, setting up a good naming convention will help make the rules more manageable. I like to sort the rules from broadest to most detailed in scope, so at the top level, sorting into Campaign level, AdGroup level, and Keyword level buckets is a good first cut.

My approach: prepend each rule with a two letter designation of its scope. For example, my CPC bidding adjustment rules can trigger at the campaign, AdGroup, or specific Keyword level. I use the following Shorthand:

The rules are presented Alphabetically (no filtering or sorting allowed), so by using this naming convention, the broadest-scope Campaign rules are listed first and the limited-scope KW rules are last.

I follow this with a verb indicating whether the rule will Improve (make higher) or Degrade (make lower) the bid price. One could also use bid up/bid down, cheapen/upgrade, etc. depending on preference. Finally, I indicate the trigger for the rule executing (ex: Avg Pos < 3). Putting it all together, I get a rule name like this: [Scope] [Action] [Trigger]
or
GR Degrade Avg Pos < 3 and
GR Improve Avg Pos > 6.

Note that this naming convention works for me, but if you have very large campaigns, you might need to indicate the campaign/adgroup/kw targets between the scope and the action. Thus if you have a Branding KW adgroup, and the rule only applied to it, the Rule name might become:

Multiple Adjustments per Day
The above discussion suggests making bidding adjustments at most 1 time per day. In practice, you could do two updates per day: the first update would use a pair of rules as outlined above. Then, you could add a 2nd pair of rules that would trigger perhaps in mid-afternoon, and which used only TODAY’s positioning information to adjust. We recommend that this 2nd set of rules make smaller adjustments since they are operating on a small data set, and therefore more sensitive to noise in the data. Where your primary adjustment rules might make a 5% change, this 2nd set of rules could make a smaller 2% adjustment. This would make your rules more responsive to changes in the marketplace without causing your spend to bounce all over the place.

There is a limit to how far you can take this technique, however. Since the Automated Rules can use “same day” data as the smallest slice, if you were to run a run in the morning using today’s data, and run a similar rule again in the afternoon, the afternoon test would be using the data from the morning as well, so you would in effect be performing a double-bump based on some of the same data, even if the morning rule corrected the underlying issue.

Is Position Preference a Good Match for Your Account?

Position Preference works, but is not a good fit for everyone. It works best for phrase and exact match keywords since broad match may make you eligible for a different group of search terms if your bids raise, and this in turn could cause your Average Position to plummet, in turn causing your bid-up rule to trigger on consecutive days trying to regain your position. You need to have a good Measure of Performance (a Key Performance Indicator, or KPI) so you can properly track which positions are actually working best for you. Finally, you need to have the attention to detail to build, monitor, and adjust the Automated Rules based on your results.

Finally, Rules are Subject to Change
The Automated Rules feature of Google AdWortds is still in its infancy, and we fully expect it to evolve over the coming months. As such, be prepared for new rule features to come into play, and perhaps some to be dropped. Even so, the judicious use of Automated Rules can help take some of the drudgery out of managing an AdWords Account, and replace features missing or lost from the User Interface.