I attend a lot of webinars.  Learning, and brushing up on techniques is what keeps us good, and on the edge of what matters to clients.

The first thing I noticed about this webinar was the Title. 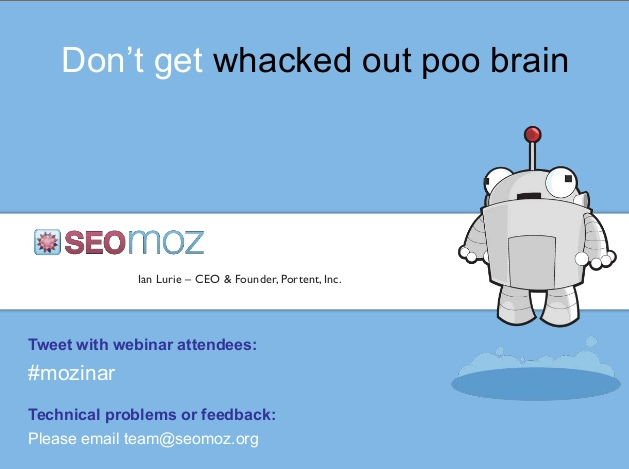 Click the image above or get the slides here: http://www.slideshare.net/wrttnwrd/time-management-for-marketers-the-mozinar

“Don’t Get Whacked Out Poo Brain.” – If you’re a fan of Adventure Time – how can you stay away from that?  If you’re not, stick with it, because the context will provide the definition.  Here’s a link to the recording over at SEOMoz.org/Webinars

Presented by Ian Lurie –  this webinar was crammed with ideas and gems to help marketers get organized, minimize distractions, and keep track of ideas, thoughts and creative processes for a marketing campaign.

I am one of those people who always has ideas and thoughts crowing their brain.  I think about marketing at the grocery store, when I’m trying to fall asleep, during movie with the kids.  What I struggle with is recording, recalling and using those ideas when it really counts.  I get distracted and interrupted and forget what I was doing, or what project I was working on.  I think, as someone who works from home most of the time, this is one of those hazards.  Home is distracting.

In short – I get “Whacked out Poo Brain” a lot.  It’s an issue that I think many of us struggle with.

You can catch some of us from KeyRelevance at next week’s SMX East in New York — Christine Churchill, President of KeyRelevance, and Chris Silver Smith, Director of Optimization Strategies, will both be speaking and moderating on various panels:

We hope to see you there! During my MIMA Summit 2010 conference presentation today, I’m covering a large chunk of information very rapidly. So, I’m providing this list of links to longer articles which more thoroughly cover the subjects touched upon in my presentation for those who might wish to dig in deeper:

Ranking of Businesses Without Websites

KML & My Maps For Local SEO

At the SMX Advanced conference in Seattle last week, the keynote session with Matt Cutts has become an expected feature, but it’s also one of the most highly anticipated and attended sessions of the entire conference. The search engines love to take advantage of search marketing conferences to make major announcements, and Matt Cutts has been known to drop both major and minor bombshells during these sessions. For instance, during last year’s session, he stated that the practice of “link-sculpting” (using “nofollow” parameters on links to advantageously design the flow of PageRank within a site) was now pointless, because Google had implemented nofollow such that it did not conserve PageRank, but instead a nofollowed link merely evaporated PR. It was clear at this year’s “You & A With Matt Cutts” that he and Danny Sullivan had planned in advance to launch directly into addressing one of the top most-recent issues of interest to webmasters: the “Mayday Update” — so-named because the algorithmic shift occurred roughly around the first week of May, and because affected webmasters were left with a helpless feeling after their pages dropped in rank for long-tail search queries. Matt and Danny opened the session in a really jocular fashion by wearing inflatable life-jackets, as a nod to the Mayday algo change. They followed that up by handing each other caffeine-free sodas, which they quickly deprecated in favor of fully-caffeinated Coca-Colas. (As you may know, Google began rolling out an infrastructure/processing change this year, called “Caffeine”, which allows Google to rapidly absorb fresh content, process it for ranking purposes, and display the new content in SERPs. Some webmasters who were concerned over the Mayday Update had wondered whether it might have been caused as some side effect of the Caffeine change.)

After the lifejackets and soda hijinks were over, Matt stated clearly and seriously that the Mayday Update was separate from and in no way caused by the Caffeine change. His statements further underscored statements he’d made earlier online. According to him, the ranking algorithm development team had decided, after consideration and testing, to publish a change based upon some “quality factors”, reducing the rankings of some deeper content pages for longer-tail queries.

Just as Vanessa Fox had opined in her piece on the Mayday Update, the weighting for keyword relevancy factors was likely reduced some in comparison to quality factors.

Steve Ballmer was interviewed by Danny Sullivan in this morning’s keynote conversation at SMX West in Santa Clara. One of the most interesting takeways from this session was Ballmer’s statement saying that Microsoft does *not* now intend to “kill off” Yahoo! Search – he further stated that within the deal agreement, Yahoo! may increase their search share via a wide number of initiatives. I’m thinking that if this is indeed the longterm strategy Microsoft is pursuing, they are doing the savvy thing of allowing multiple search engine applications which may better target multiple demographics.

Ballmer naturally responded with some of the usual positive or evasive statements that are typical of large-company CEOs when Danny asked questions that many are curious about. But, Ballmer also answered some questions very honestly/openly in a refreshing and direct manner — such as stating that they didn’t necessarily see Bing as moving overnight from a number two position in the search market pie. And, he said that no one sets out trying to be #2 – that they desire to do a really good job in search.

The main takeaway of the session is just how pleased and confident Ballmer is with how Bing is doing — that confidence implies that Bing is a major strategic initiative within Microsoft, it’s here to stay, and that they intend to continue to aggressively work to increase marketshare.

Google, you’re on notice! Looks like the underdog will be nipping at your heels, ongoing.

Christine Churchill and I from KeyRelevance are attending this year’s SMX Advanced in Seattle where Microsoft has really pushed to promote their new search engine vision, Bing. Microsoft officially launched Bing (tagline “The Sound of Found”) this week, with a number of promotional spots intended to coincide with SMX Advanced to take advantage of the presence of so many search-industry wags who blog and the influential search marketers attend the conference. Microsoft’s reportedly intending to spend over $100 million in advertising and marketing on Bing, and the launch party, dubbed “Bing presents In The Park 2009”, was virtually a return to the days of launch party excess predating the dot-bombs. The event, open to all attendees of SMX, was held in the Olympic Sculpture Park on the water front of Puget Sound and featured loud music, brief acts by weird performance artists, glowing Bing ice-cubes in free-flowing drinks, free nibbles, t-shirt giveaways, and a great view over the water.

I was privileged to have dinner just before the launch party with an old friend of mine who now does business development for Microsoft, and she later went on to Microsoft’s own internal Bing launch party over at the Fisher Pavilion at the Seattle Center, where news journalists had apparently also been invited for the outside portion of the event. By the time the launch party ended, and I walked back to the hotel along with Chris Sherman and Christine, there was a huge “search beam” light shooting up from the area of Seattle’s Space Needle into the dark night sky. I was completely mystified as to the significance, but it turns out that this was part of the “spectacular light show” that Microsoft engineered below the Space Needle in Seattle Center as part of their big launch. The whole launch extravaganza was slightly marred, perhaps, by poor coordination/communication, since it probably would have been far more beneficial to have combined the Microsoft internal/journalist/press-conference with the SMX party, since the SMX attendees mostly had little idea as to what the light beam signified, and the journalists attending the light show sorta felt the launch hype fell short, since they didn’t get all the benefit of the party buzz and excitement, not to mention the free party food and favors. Never have a big launch without making certain the members of the press have access to drinks!!!

Part of the light show included a big, illuminated version of the Bing logo on the grass in front of the Fisher Pavillion.

Lu answered Danny’s Bing questions with aplomb, though his responses were tempered by the knowledge that Microsoft’s past attempts at competitive thrusts against the Google domination of search market share have fallen short. Danny sported a t-shirt he’d apparently had custom-made for the occasion which exclaimed “Bada” across the front — a reference to “Bada-BING!”, of course. For many of us at the conference who kicked the tires on Bing, the new search engine didn’t seem all that extraordinary or innovative. With the blended search results and Dr. Lu’s emphasis of improved relevancy work, it was felt by many that the engine features are still somewhat immitative of other players, though it’s perhaps now caught up some and might compete better. I heard some state that Bing was what Live Search should’ve been. More interestingly, I heard an anecdotal mention on Twitter from someone who said that Bing seemed to rank their pages a whole lot better than Live Search.

My take on it is that any search engine and presentation improvements they may have added appear pretty small and incremental thus far. But, their aggressive push to fine-tune the branding with the new name/logo, paired with the advertising and marketing warchest might have a chance of increasing their market share.

We’ll probably be posting more here later from the conference on Christine’s presentation on “Keyword Research Artistry” and my presentation for “Beyond the Usual Link Building”. Subjects touched upon included Cerf’s work on the Interplanetary Internet with NASA. It is a new standard to communicate from planet to planet, using radio/laser communications that are highly tolerant to signal degradation.

Cerf also talked about search marketing, the tolerance/intolerance of users to advertising, and the high level of importance that Google places upon internet privacy.

It was a very interesting session! 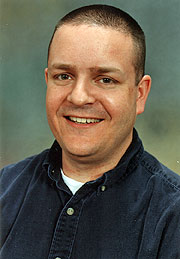 We’ve got some exciting news here at the SEMClubhouse. Another great SEO mind has joined not just the clubhouse, but the KeyRelevance staff as well.

With companies needing to stretch their marketing dollars, adding Matt McGee, who specializes in working with clients to maximize the return on their online marketing investment, was a great expansion to the KeyRelevance team.

“Google’s Universal Search changed the rules of online marketing,” said Christine Churchill, President and CEO of KeyRelevance. “Search engine optimization still rules, but now it’s the tip of the iceberg of what we need to provide to clients. Online marketing now encompasses not only SEO and Pay Per Click, but blog and video optimization, local and mobile search, social media marketing, and much more. Matt’s specialized knowledge in these areas makes him a valuable addition to our already robust team.”

“In addition to being a first class SEO, Matt is one of the most positive people I’ve ever known,” added Churchill. “He infuses the element of fun into the workplace.”

A seasoned marketer, Matt has been online since 1994. Matt is a regular speaker at major search industry conferences including Search Engine Strategies, Search Marketing Expo, and Small Business Marketing Unleashed. He is also a columnist at Search Engine Land. In his spare time, Matt runs the Small Business Search Marketing blog and one of the oldest and largest independent U2 sites on the Internet at @U2.com.

“KeyRelevance is one of the most respected companies in the search marketing industry, and it’s an honor to join a team with such impeccable credentials. I’ve known Christine, Li, and Bill for years as friends and peers. I’m excited to join them and the rest of the KeyRelevance crew,” says McGee.