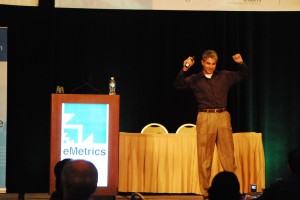 I don’t know if I’ve ever seen a keynote be so insightful and revealing about a major internet website as I did when I attended Joe Megibow’s Keynote at the eMetrics Marketing Optimization Summit in Washington DC. Joe is from Hotels.com and the audience was certainly treated to some great insight into listening to the voice of a customer as well as testing and being fanatical about “getting it right”.

Hotels.com is quickly approaching its 1 millionth user review. Through reviews and feedback they have learned to both listen and learn to provide what their customer really want, not what what they think their customers need.

Two years ago, Hotels.com was at a crossroads, they were known as the “low cost, cheap operator”, but they wanted to be more. At the beginning of 2008 they launched a re-branding which included re-branding their website. A few weeks ago, they relaunched their search engine which is faster and easier for customer to use.

Hotels.com does a lot of analytics through Ominiture. They are fanatical, analytics drives almost everything on their site. However, over the last year they wanted to listen to their customers a little more, but they really had no context. Their good sales were masking the problems that were really happening on the site, so they needed to find another way. They combined “voice of the customer” with analytics in a usable way.

They installed OpinionLab, they got a lot of feedback. What’s even more important, every OpinionLab entry is tied to TeaLeaf. They also installed over 700 phone numbers so that they can measure all of the channels that sales and feedback comes from. All of this transforms Hotels.com.

Executives at Hotels.com get feedback everyday, and they use it, they read it. They click on what happens in different issues watch it in TeaLeaf and send their own feedback to the different teams within Hotels.com. Everybody has buy in to fix things on Hotels.com. They’ve acted on 200 site conversion issues over the last 6 months. The thing to remember is that mistakes are common, everyone has them. But not everyone realizes they have them and on top of that not everyone acts upon their mistakes to correct them.

They had issues with logins. They thought they only had 2 ways to login, but through the customer feedback and watching the sessions being replayed in TeaLeaf, they were able to see that they actually had a third way to login that they never realized they had. This third way was what was creating a big problem. Because of this they added a “book without registering” option. Immediately half of all the customers chose this option!

Hotels.com realized by installing the “book without registering” option, they were making it hard for their customers to book. Not only that, customers were not getting any kind of value out of registering with their site. There was a disconnect between how the marketers were thinking about customer conversion. They really needed to give customer a reason to register, a reason to care about their accounts. They introduced – book 10 nights, get 1 night free – “the loyalty program that doesn’t require too much loyalty”. 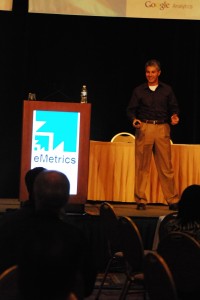 The loyalty program exposed issues they didn’t realize that they had. A customer had an issue with logging in. Joe called her and talked to in detail about what happened. He actually turned her into a fan of Hotels.com. But from the conversation Joe also gained valuable insight, apparently something was happening with the loyalty program after booking many nights and getting a bunch of free nights. A certain field was getting wiped out. They looked into this and found thousands of profiles with the same issue and as time was going on, it was getting worse. They fixed the issue within a week.

Customers do not repeatedly make this stuff up. They were getting random reports of issues of their Terms of Service. It was not allowing users to accept it no matter what they tried. It was about 1 person a day, but they were having trouble recreating the problem. When they started looking deeper, they found 40-50 people a day were having this problem, and it had to do with IE. It took a few months of investigating but they fixed it, and now that issues gone and 40-50 more people are converting and booking.

Minor updates can create major issues! One of their updates created issues with the SSL and how cookies were handle. People browse in different ways, a lot of people use the back button. Apparently a lot more than they realized, combine that with the fact they use 4 different servers to service up Hotels.com, when customer were backing out of the SSL are to regular HTML pages, the update was dropping their cookies, and then they had a 1 in 4 chance of getting back to where their were before, if they didn’t hit the right server, their information was dropped. This was very frustrating to their customers, they listened, they used TeaLeaf and corrected it.

Hotels.com is fanatical about getting this stuff right. Everyone inside Hotels.com is dedicated to it. Internally they have people just wanting to create mashups, tools and applications to help them make it easier to listen to the customer and fix things that aren’t working right. They built an in-house iPhone application for monitoring the Voice of the Customer since most of their staff was on the iPhone. Over the past months, they’ve seen a substantial increase in conversion because of their efforts. They’ve created a ton of good will and they are winning the cultural shift within Hotels.com internally of doing good by the customer.