Last week, I had the opportunity to speak on the Social Media Ethics panel, as a representative of Key Relevance, at SMX East. I was rather excited to speak about this subject, since over the past few months I’ve been delving deeper into the subject.

Two of my fellow speakers on the panel were Marty Weintraub of aimClear, and Steve Rubel of Edelman. Steve has been a stalwart in social media for quite a few years, even before the term “social media” was coined, he also runs the popular blog MicroPersuasion.

I started off the session. The focus of what I wanted to relate to the audience is that right now, there’s no set “ethics”, no rules, only guidelines set up by organizations like WOMMA. A lot of this is trial and error by companies and learning from past mistakes. In the end, it’s the audience you are working with or speaking to that will ultimately decide what’s ethical, not the FCC, not WOMMA, not SEMPO, and certainly not me or any of us speakers on the sessions’ panel.

The audience decides what’s acceptable, and believe me, they will call you out for being in the wrong, disrespectful of the community or acting in an unethical way. The audience will let you know with “Word of Mouth” and their purchasing power. Unfortunately for marketers, we’re not in the year 1995 anymore, where we had 28.8 baud modems, and word traveled a lot slower. If you act out of line, be disrespectful, totally mess up with a customer, word travels nearly instantaneously these days. With faster connections, the ability to build blogs to highlight bad customer service or unethical experiences with companies and brands, the customers now have a greater say.

I brought up the ethicalness of character blogs by showing Dr. Robin Scorpio’s blog. For you General Hospital fans, it’s likely a familiar site. For you folks who skip the soap operas, Robin Scorpio is a long time character on the ABC Soap, and ABC has put some considerable time into this blog’s development. Robin Scorpio however, isn’t “real”, so is this an ethical practice? The audience certainly thinks so, looking at the interaction on the blog, people leave comments constantly on posts, even one that’s asking what last name she should give her unborn baby girl. The audience certainly knows Robin’s just a character, but they actively participate to help build her storyline with their comments.

Then I addressed avatars. Is using an avatar that’s not a picture of yourself “ethical”? Just like character blogs, it really depends on your audience. If the avatar is how you identify yourself and it’s something the community understands, you can be completely ethical to use an “Eagles” avatar for your sports community, a “Nittany Lion” for your alumni community, and your own photo for a professional community. Avatar’s really aren’t the issue when it comes to ethics, it’s how you act and present yourself in the community, the persona, so to speak is what is at the heart of the issue. 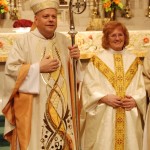 Intent, in the end is what it’s all about. If your intent is to just “market” or “gain links” rather than be an active participant in the social community, the audience is going to “out” you faster than you can snap your fingers or hit the enter key. The gut check here is if you think your mom or your grandmother would approve of what you are doing (or would you do it to them), then you are probably in the clear. If you think that’s a tough test for you, check out my mom – she’s an Episcopal priest.

Marty was up next, he took on the task of discussing several types of “avatars” his staff at aimClear has come up with. There was quite a few listed. I think though it’s likely better described as “personnas” than avatars, but perhaps that’s semantics.

To round out the session, Steve Rubel took to the podium, minus slides. I thought this was great! Steve brought up some really valid points. I’m not about to reiterate everything he said, he actually has the full text of his presentation on his blog. In general Steve and I were echoing the same things when it comes to what’s ethical.

Steve and Edelman have been through some of the toughest situations in social media in the past couple of years. From Walmart to MSN, there have been some big stumbling blocks along the way, but Steve was open enough to say they’ve learned a lot over the last couple years. I even pointed out how Mr. Edleman takes ownership for those mistakes, and how they’ve helped their clients over their mistakes. Steve pointed out Walmart’s CheckOut blog as an example.

So what was the conclusion? That “what’s ethical” is not something written in stone, because this industry is constantly changing with emerging technologies. At the end of the day it’s your audience that’s going to be the deciding factor in what’s ethical in the social media communities.